Problem :
Ms Surface Pro4 was stuck after a critical windows 10 update. It would keep rebooting and Display the Blue screen of death with “SYSTEM_THREAD_EXCEPTION_NOT_HANDLED” message. 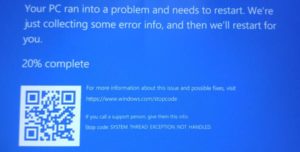 Solution :
For me, constantly hitting F8 ( or Fn+F8) while it was restarting finally forced the system to “Restore the previous version of windws”. It may work for someone else too.