Working for a company that sells Wacom products, I had long lusted over a Cintiq, but I got a chance to try one when last week my cousin asked me to buy a Cintiq 13HD and ship to her in India, which meant that I would have a full week to test it and give my verdict. I am not a graphics artist, but the idea of being able to draw something and instantly see it on the screen was tempting. She was much comfortable knowing that I would have tested it and included anything extra ( like HDMI converter for Mac) that she would need ,and didn’t mind me opening and testing it. Someone was going from Dubai to India after a week, so it gave me ample time to play around with it.

Wacom, Cintiq and Tablets
Anyone who is in Graphics designing /animation , knows about Wacom. It is perceived as the best in drawing tablets by the graphics enthusiasts. The product range inlcudes Basic Bamboo tablets, Intermediate Intous Tablets and Cintiq Display/Tablets. Pricewise the tablets start as low as AED 300 and the cintiqs can go upto AED 16,000 or more, so there is a wide spectrum of products – one for everyone. Cintiq 13 HD was launched as a replacement for 12″ Cintiq 12WX and retails for about AED 4,200- the cheapest of the Cintiq range. 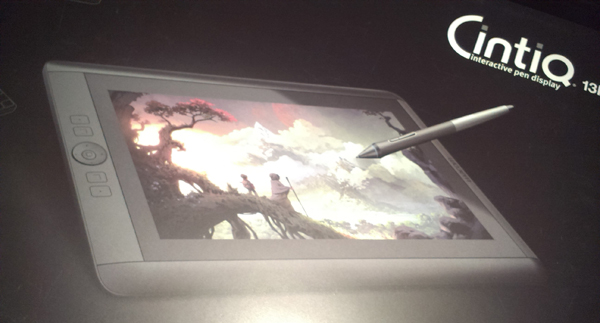 First thing that you would always notice about Wacom products on unboxing is the build quality. Cintiq 13HD feels goods to hold and has the premium finish. It has a clean design with 5 raised keys on the side, which are easy to reach and navigate as they are raised. The soft touch material has a good finish.

Despite being wider than 12WX, the 13HD is lighter at 1.3 kilos only- Its really really slim. Unlike the 24HD or 22HD models, this one can be easily taken with you and comfortably worked upon sitting in your lap. The Bigger Cintiqs like 24HD are meant to be kept stationary on the table. There is a stand too in the box for the anchored use. However this is not absolutely portable as it needs external power.

In the box apart from the Cintiq and stylus case, you will also find the Stand, a 3 way cable (that splites into USB, HDMI & Power) and the Driver CD. It says the Display size is 13″ Diagonal with 1920 x 1080 HD. I am sure that’s a good thing. The Stylus comes with a few extra nibs and with a protective case that also comes in handy if you want to carry Cintiq.

It took me not more than 10 minutes to set the whole thing up with the drivers installed. I didn’t try any of the software that might have been included because I already had PhotoShop that I could use.

Feeling of drawing ( or doodling in my case) on a Cintiq 13HD is somewhere between paper and plastic. It has texturized feeling so you don’t feel like you are drawing on a glass screen, but it doesn’t exactly feel like paper either. It takes some getting used to it I guess.

I could cheat easily by having a photo on Paintshop, and tracing over it with the stylus and the result was beautiful, offcouse I am sure none of the professional artists do that. The stylus easily pairs up with the tablet, and has 2048 pressure levels. You will be using the express keys a lot ( I used the ring key for zooming and scrolling), it’s a good thing that they are raised so you can easily reach the right one without looking.

If I were a graphics artist, getting a Cintiq would be a dream come true and this review would be full of sketches and drawings ( and love for Cintiq), I am going to have to do with a little technical review only.Cintiq range of Wacom is loved by the graphics artists and 13HD is no exception. As I said, I work for a company that sells it and anyone I speak to who bough it has good things to say about it.

What 13HD doesn’t have yet is touch. Wacom 24HD and 22HD, both come in a touch variant that gives you multitouch options, but so far no such option in 13HD. For Scrolling and zooming, touch option would come in handy. They should have included that.

Also I find it strange that they didn’t include an adapter for MAC. When you are paying 4,200 Dirhams for something you would expect everything to be included, and most of the graphics guys use MAC don’t they.

In PostScript : My Cousin got it yesterday in India and she is loving it, next in her shopping list would be a bigger cintiq , probably 22HD or 24HD. They are expensive in India compared to Dubai she tells me. As for me, I bought an Inkling that lets me doodle on a paper and digitizes for me. I will post the review ( and my doodling if I have learnt by then) next week.