The other day as I was watching a popular TV program, where the winner was to be selected based on public vote. My Favorite singer lost , and I immediately could see the shortcoming of the simple voting system. No, I am not a sore loser, only that I really think that a voting system that lets you vote for a single candidate is flawed.

Let me elaborate with an example, on how the single voting system chooses the second best candidate instead of the best candidate.

Imagine 3 candidates ; Cathy, Tim and Jack. There are 10 voters, and your single voting system reveals the result as

No winner on guessing that this system will have Cathy as a winner with 60% of the votes. However There is a scenario in which Despite such voting, Cathy couldn’t be the most preferred singer.

Let’s ask the Voters again to vote , this time Each Vote is Complete Vote. They have to Rate the Singers, not just choose 1 singer.

So Voter 1, Says he likes Cathy the most and Tim the least , and we make a table based on each voters preferenace as follows. 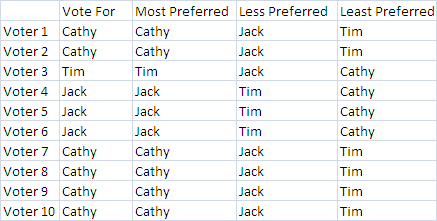 Now, give the weightage of 3 to Most preferred category, 2 to Less preferred and 1 to Least preferred.

Clearly Jack is a winner. However the problem with our conventional voting system is that you are allowed to choose only for 1 candidate. Highly flawed system I personally think.